The most important challenge facing car manufacturers today is to offer vehicles that deliver excellent fuel efficiency and superb performance while maintaining cleaner emissions and driving comfort. Growing awareness of global warming as a big threat to the environment, has added yet another dimension to this challenge. In order to prevent global warming, the reduction of CO2, one of the greenhouse gases, is called for. In order to achieve reduction of CO2, there is an immediate need to develop and promote widely, the use of an automotive power plant that emits significantly less CO2 than conventional petrol engines. 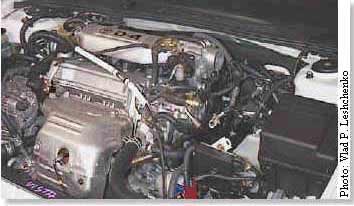 The Gasoline Direct Injection technologies are products efforts to maximize fuel economy, and thereby minimize environmental impact at an accessible price by harnessing the GDI's inherent advantages. They are designed to widen acceptance of environmentally friendly technology by negating problems associated with alternative engine technologies, namely price and performance restrictions as well as the lack of support infrastructure. GDI-technologies deliver a 10~30 % improvement in fuel economy over a current GDI-engine, along with enhanced drivability. 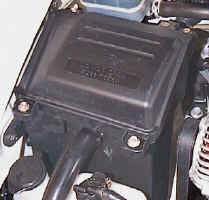 "...Contrary to what Mitsubishi or Citroen may claim, neither companIntake and Ignition Coilsy is the first , or even the first European company to mass produce a direct injection gasoline engine. That honor belongs to the Goliath from Germany (Borg ward) from the early 50's (postwar Goliath new model started in 1950.) It was a minicar (not a microcar-that was the Lloyd). Both the Goliath and Lloyd were transverse engine front wheel drives with CV joints (in 1950, many years before Alec Isogonics "invented" both for the Mini). The Goliath even had a fully synchronized 4 speed transaxle and 4 wheel independent suspension back then..."
Has written Dean Stanley. 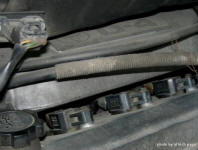 In the these engine, petrol is directly injected into the cylinder, eliminating many of the hitherto restrictions on combustion control, such as the impossibility of adding fuel after the induction valves were closed. By achieving precise combustion control that is free of restrictions, the GDI delivers a previously unseen combination of fuel economy and power. In conventional engines, fuel and air are mixed outside the cylinder. This ensures waste between the mixing point and the cylinder, as well as imperfect injection timing. But in the Toyota D4 engine, petrol is injected directly into the cylinder with precise timing, eliminating waste and inefficiency. 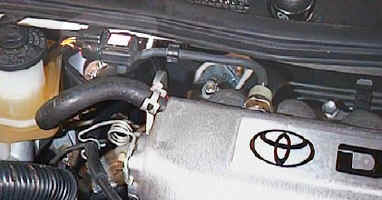 For years, engineers have known that if they could build a petrol engine that worked like a diesel engine-in other words, one in which fuel is injected directly into the cylinder and the stratified, rich mixture right near the spark plug is ignited-they would have an engine that achieved both the fuel efficiency of a diesel engine and attained the high output of a conventional petrol engine. However, development of such an engine has been impeded by petrol's poor combustibility. Diesel engines operate on a thermodynamic cycle, meaning that as long as a sufficient temperature is reached, thorough ignition will occur regardless of the air/fuel mixture condition. In order to achieve combustion with petrol, gaseous fuel and air must be mixed to form just the right air/fuel mixture, and precise control of position and timing of the air/fuel mixture is necessary to ensure delivery of this mixture to the very limited space between the spark plug electrodes in the very specific timing of ignition. The Gasoline Direct Injection engine is able to achieve this through technology that enables precise control over the air/fuel mixture.

The GDI engine's ability to precisely control the mixing of the air and fuel is due to a new concept called wide spacing, whereby injection of the fuel spray occurs further away from the spark plug than in a conventional petrol engine, creating a wide space that enables optimum mixing of gaseous fuel and air. In stratified combustion (Ultra-Lean Mode), fuel is injected towards the curved top of the piston crown rather than towards the spark plug, during the latter stage of the compression stroke. The movement of the fuel spray, the piston head's deflection of the spray and the flow of air within the cylinder cause the spray to vaporize and disperse. The resulting mixture of gaseous fuel and air is then carried up to the spark plug for ignition. The biggest advantage of this system is that it enables precise control over the air-to-fuel ratio at the spark plug at the point of ignition. 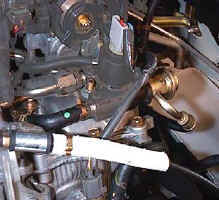 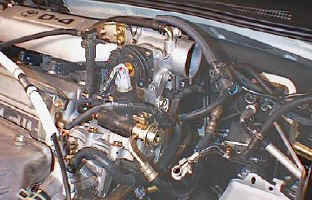 Mitsubishi released the ultra-efficient GDI engine in August 1996, becoming the world's first automaker to successfully build a production in-cylinder direct-injection gasoline engine. For many years the dream of automotive engineers, the GDI engine employs four core technologies to achieve ultra-efficient fuel economy, clean performance and powerful output. These exclusive Mitsubishi technologies are the " upright intake port " that generates smooth intake flow and a powerful vertical vortex; the " high-pressure fuel pump " that is necessary to inject fuel directly into the cylinder; the " high pressure swirl injector " that injects the fuel in an optimized spray pattern; and the " curved top piston " that maintain the compact spray pattern. By adopting these innovative technologies, we gained free control over the fuel-air mixture and combustion, minimized emission gases, at the same time increasing fuel economy and output. The GDI engine has earned worldwide acclaim, and over 600,000 Mitsubishi cars are already equipped with the technology.

Fuel is delivered to the fuel rail (pressure accumulator) by the high-pressure pump. Hydraulic connections join the fuel rail to the solenoid-operated high-pressure fuel injectors. A closed control loop comprising the fuel pressure sensor, pressure control valve and electronic control unit controls the pressure of the hydraulic system individually for all operating points. The injection pressure, start of injection and injection lime can be freely selected (within predefined limits) for each operating point of the engine. The shape of the injection jet is adapted to the requirements of the engine.

The tried and tested MOTRONIC which has been extended to include special functions for gasoline direct injection is responsible for engine management. The MED 7 coordinates the different torque parameters according to the position of the accelerator pedal and undertakes the necessary control actions in the engine.

The air mass drawn in by the engine is measured by a hot-film air-mass sensor. The MED 7 has an ETC system, i.e. the degree of acceleration required by the driver is detected buy a pedal travel sensor and the sensor signal is passed on to the control unit. The control unit regulates the electronically controlled throttle valve under consideration of other vehicle and engine data.

The direct-injection spark-ignition engine has different operating modes. The advantage of GDI with its internal mixture formation is increased compression with improved efficiency.

Lower part-load range with a very lean mixture (λ > 1) and targeted stratified charging during operation without throttle: The fuel is injected directly into the cylinders in the compression stroke shortly before ignition. The useful speed range is limited in the case of stratified charging. The advantage of this stratified operating mode is the reduction in charge cycle losses caused by operation without throttle. Here, fuel is the only factor controlling performance. With the homogeneous (λ = 1) operating mode, the fuel is injected during the induction stroke. This mode can be used across the entire speed / load range. Here, as with intake manifold injection, performance is controlled by charging and ignition. With the homogeneous lean (λ > 1) operating mode (as with the "homogenous" mode); injection takes place during the induction stroke. The quantity of fuel is, however, less (excess air). As with stratified mode, fuel is also the factor controlling performance in this operating mode.

The engine management system maintains the torque at a constant level during load changes between these two operating modes (homogeneous and stratified mode) by adapting the quantity of fuel, air charge, and ignition angle according to the driver's requirements.

The high rate of exhaust gas recalculations in spark-ignition engines with direct injection reduces the volume of untreated NOx emissions (upstream of the catalytic converter). Newly developed catalytic converter systems also reduce the remaining nitrogen oxides to below the levels required by law, even during operation with a lean mixture.

Today's direct injection systems can reduce fuel consumption by up to 15% and therefore, effectively lower the amount of traffic-related C02 emissions. The system satisfies the EU IV exhaust-emission standard and has an EOBD self-diagnosis which complies with the European standard.

The main feature of the engine of direct injection consists that fuel moves directly in cylinders through atomizers which are established in the block and under pressure in tens times more, than in usual injection systems. As consequence (investigation), considerably raises a degree of dispersion of fuel and his (its) combustion is improved. Pressure in fuel system is created by the additional pump with a mechanical drive (High pressure Fuel Pump).

Discussion about Repair 1AZ-FSE It is sufficient the geometry of the top surface of pistons is remarkable.

The significant part of the hinged equipment described injection systems has remained without changes. For example, MAP-Sensors, Oxygen Sensors, TPS. The arrangement is unusual ECU - it is direct under a cowl.

In D-4 will be used VVT-i (Variable Valve Timing-intelligent) which application allows to increase twisting moment and capacity of the engine at simultaneous decrease (reduction) of toxicity of exhaust gases also is used. Adjusting synchronization of opening of inlet valves according to number of revolutions of the engine to become possible (probable) the increase of quantity (amount) of air acting in cylinders that allows to increase and quantity (amount) of fuel of combustion submitted in the chamber (photo and etc.)

Usual system EGR is applied for decrease (reduction) of a level of harmful emissions NOx (Exhaust-gas recirculation) with which help the part of exhaust gases moves in cylinders, that displaces balance of reaction of formation (education) NOx aside reduction of their quantity (amount). The GDI-technology allows to reach (achieve) high density of a fuel-air mix that makes possible to use substantial growth of quantity (amount) EGR without risk of decrease (reduction) of stability of combustion. In result in the GDI-engine quantity (amount) NOх in exhaust gases decreases on 70...95 %.

The applied constructive and other decisions have allowed to receive significant improvement of parameters of capacity and twisting moment at simultaneous increase of profitability and decrease (reduction) of a level of toxicity of exhaust gases of the automobile. Similar increments of parameters at the engine 1JZ-FSE VVT-i D-4 (BEAMS: Breakthrough Engine with Advanced Mechanism System).

Engines with gasoline direct injection need two O2-sensor, one upstream and one downstream of the catalytic converter. To allow the engine to run lean, the sensor upstream of the catalytic converter must be able to detect a lean mixture (λ >1). The very latest broadband sensors are used for this purpose. Thanks to their planar design, they reach the required operating temperature after just a few seconds. As a result, they make a significant contribution to reducing emissions during the critical warm-up period so that the Euro IV and ULEV (Ultra Low Emission Vehicle) regulations can be satisfied.